Our talks are now held using Zoom, the majority of which are being made open to the general public free of any charge (although due to limited space, priority may be given to RRRA members). Booking (which is essential) for some talks will be organised through Eventbrite, otherwise through a simple form - this will be indicated next to each talk. All public talks and seminars will be uploaded to our new YouTube channel. Click on the list below for details, to book your place at future lectures, and for links to YouTube.

Ivan D Margary (1896 - 1976) is generally known theses days for his comprehensive gazetteer, Roman Roads in Britain, yet there was so much more to the life and works of this intensely private man than a fascination with Roman roads. This first event is free of charge and open to all, although booking via Eventbrite is essential.

Thursday 24 June, 2021, David Ratledge; Changing the Map; How LiDAR has transformed our understanding of the Roman Road network in NW England

Thursday 30 September, 2021, Mike Haken; How to Identify a Roman Road

Changing the Map; How LiDAR has transformed our understanding of the Roman Road network in NW England

Until recently, the network of Roman roads serving the dense concentration of Roman forts in North-Western England was only poorly understood, with long stretches where routes were lost. Traditional research methods, such as field walking and aerial-photography, had just about been exhausted. Fortunately, imagery derived from LiDAR data can often reveal the surviving remains of the agger, terraces, side ditches and cuttings, where they cannot be easily identified through traditional fieldwork. Using LiDAR, many missing pieces have now been found, along with previously unknown roads and some major surprises. In one instance, the destination of a supposedly well-known major road was shown to be incorrect and in another, a fort believed to be at the end of a cul-de-sac was found to be on two previously unknown routes into Scotland. Clearly, without an understanding of the Roman road network establishing the roles of forts can be fraught with errors.

Watling Street, Stane Street, and the origins of London

How to identify a Roman Road

You might think that this was a simple question to answer, however you would be very wrong. In this lecture, the RRRA chairman will look at the wide variations in how Roman roads were laid out and constructed, and how this impacts on identifying their remains on the ground today. He will also show how to avoid being misled when using technologies such as lidar, and how some of the traditional assumptions about so called ‘fossilised’ roads have led to serious misinterpretations in the past. The lecture concludes with a brief look at a systematic method of rating the probability of any given feature actually being a Roman road, as proposed by Mike in a recent paper published in RRRA’s journal, Itinera.

The recently identified alternative route to RR7, on the western side of the Lune Gorge

Long-distance alignments (LDAs) are a relatively new discovery, attributed to the earliest days of the Roman occupation. This lecture develops the recent RAI lecture, looking at what long-distance alignments have in common, how they fit in with what we know about Roman surveying and mathematics, and how they can be recognised.  We then focus specifically on LDAs of the London area associated with Watling Street and Stane Street. We consider what can be deduced from them regarding Roman intentions for this area on the Thames that had known no significant settlement during the Iron Age. 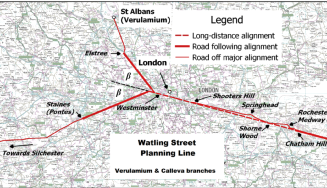 Colchester is well known as the oldest recorded "town" in Great Britain, so it seems reasonable to assume that the Roman road network around the town must also be one of the oldest in the country. But is that really the case, and if so, where is the proof?

The Colchester Archaeological Group was founded over 60 years ago, and Geoff Lunn is currently chair of their Roman Roads Study Group. In recent years the group has been using emerging technologies such as geophysics, Lidar, Google Earth and thermal imagery to further understand this often puzzling network of roads. This seminar presents an overview of the current state of that work, and as is so often the case in archaeology, seemingly more questions than answers.

The book collates and summarises the previous excavations and findings of this undoubtable Roman road, before moving on to analyse the road’s location along a constrained corridor between Hadrian's Wall and the earthwork to its rear, the Vallum. The analysis reveals a clear pattern as to how the road was laid out relative to the other linear structures. The structure of the road, plus the many and impressive road engineering features such as terraces, cuttings, zig zags and inclines are considered, as is a likely construction date, leading to an inference as to the traffic the road could support and therefore its likely role supporting the frontier. The road is very visible and accessible, particularly in the centre crags section and is probably the most impressive example of Roman road engineering in Britain, one which is well worth taking the effort to visit and walk along, for which a walking guide is included. Publishing is through Mike Bishop's Armatura Press.

“The Roman forts north of the Antonine Wall are linked by a well-engineered road", or so say the textbooks. In the research of the Roman Gask Project on these forts we found that the road provision changes dramatically from fort to fort with many only displaying 'stump roads' leaving their gates. Is this just a matter of not enough time before the withdrawal in 86/7AD? What is the actual date for the road itself and how much do later refurbishments complicate our dating attempts?

It is undeniable that Roman roads played a central role in the reconfiguration of Britannia. Through their construction, Roman roads increased the speed and frequency of communication; improved administrative control of the province; and facilitated the development of commerce. Despite this, the variability in Roman roads across Roman Britain has often been ignored. This talk will present my PhD research whereby this variability will be explored, offering potential discussions on how individuals would have used the road network; how the road network functioned as an interconnected system; and how the road network facilitated the social and economic development at a local, regional, and provincial scale.

Contrary to what is frequently stated definitively online, most Roman roads were  not built like this! 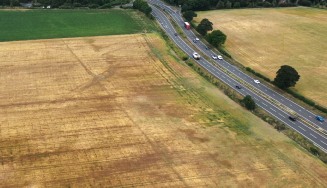 Cropmarks of the Pye Road, the Roman road from Camulodunum (Colchester) to Venta Icenorum (Caistor), and a branch road from it, showing clearly on this aerial photograph, right next to the modern dual carriageway.